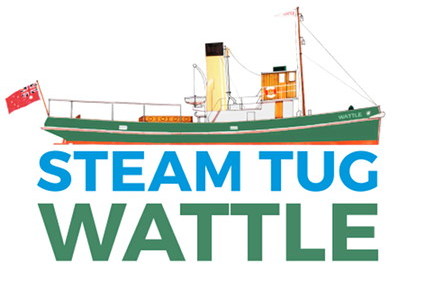 Steam is supplied from a two-furnace Scotch Marine wet-back boiler, 10'9" (3.28m) diameter and 11'0" (3.35m) long. The boiler was originally fired with dewatered and filtered waste oil, but has recently been converted to burn distillate for environmental and maintenance reasons. Total bunker capacity is 10 tons in port and starboard tanks. The boiler operates at a pressure of 120-130 psi to power a two-cylinder (compound) engine.

Wattle was not originally equipped with a steering engine but the ship was found to be very difficult to steer, so the auxiliary steering engine was fitted on the main deck, abaft the Engine Room skylight. To meet current safety and amenity standards, a 19kVA diesel generator was installed in the aft storage compartment in 2016.

Launched at Cockatoo Island on 27 June 1933 by Cockatoo Docks & Engineering Co. Ltd. (CODECO) on order from the Commonwealth Shipping Board.