In 1976 Leigh Doeg, a young man with a passion for vintage steam ships, formed a small not-for-profit volunteer group, the Victorian Steamship Association (VSA), to acquire a vessel to operate on Port Phillip. Leigh was aware of the problems the Sydney syndicate was experiencing with Wattle, and commenced discussions concerning its preservation. During 1978 the syndicate agreed to gift Wattle to the VSA in an unencumbered state. Before accepting the ship Leigh had her slipped at Berry Bay in November 1978 for inspection and maintenance.

In January 1979 Leigh and Murray Hill (a marine engineer and member of VSA) raised steam on the Wattle and completed test runs of the ship on Sydney Harbour, assisted by a scratch crew from the Sydney Maritime Museum. Later that year Wattle was towed to Melbourne by the Howard Smith tug Edina, arriving on 11 September 1979. The tow was a gift from Howard Smith to the VSA and the people of Melbourne.

VSA volunteers began a major restoration program at 20 Victoria Dock to bring Wattle into commercial passenger survey. Coincidently, the berth at Victoria Dock also marked the start of an ongoing association with the sail-training schooner Alma Doepel, also undergoing restoration at that time.

From 1980 restoration progressed with a small volunteer workforce, in-kind donations from industry and supporters, and limited finances. Restoration accelerated in 1984 when VSA received a grant of $110,000 from the Community Employment Program to engage long-term unemployed people, and the Victorian Government invested $45,000 from the Victorian Economic Development Committee in the Wattle restoration. (Click images for larger versions.) 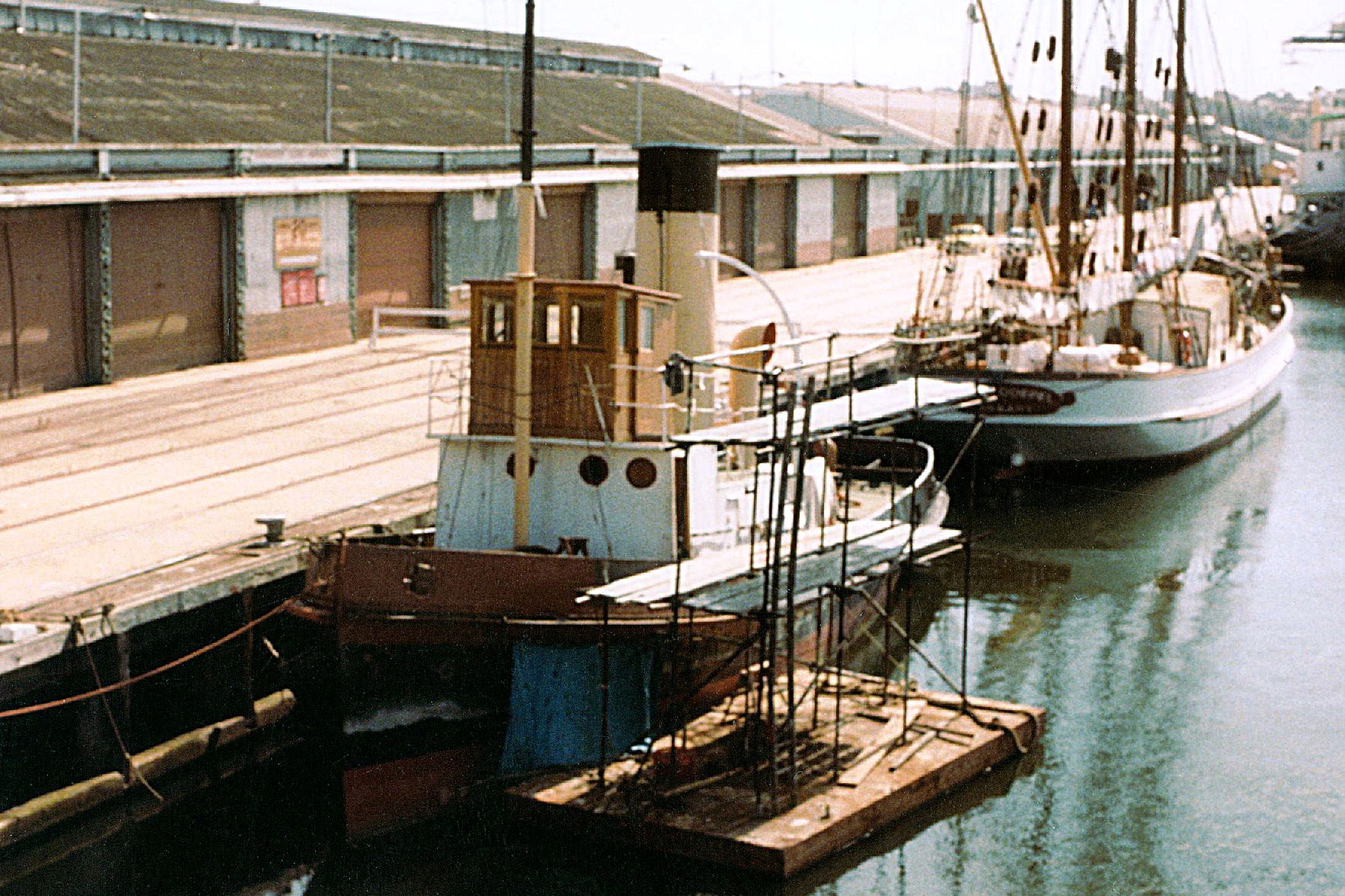 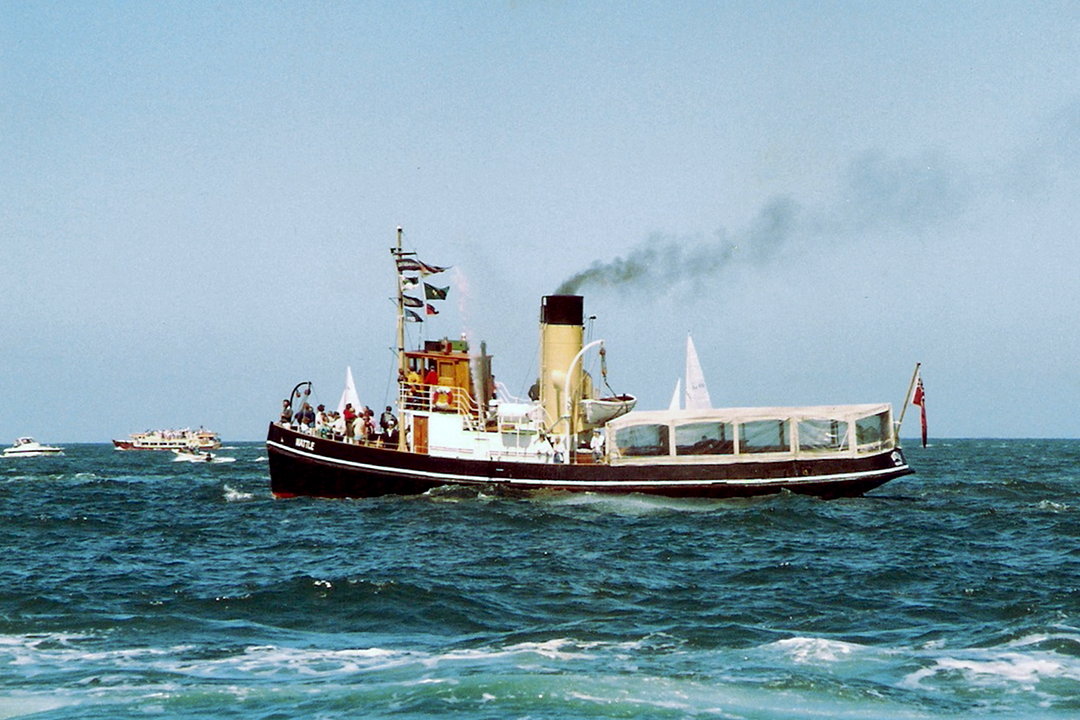 From 1985 cruises began on Hobsons Bay and the Yarra River, and in 1986, Wattle obtaining survey to carry up to 50 passengers and 5 crew on Port Philip. The VSA commenced a regular commercial service, with two hour cruises on Sundays on the Yarra and Hobsons Bay, and all-day return cruises on Saturdays to Portarlington.

Private charters were available for special events, birthdays, weddings, anniversaries and corporate functions, and VSA located the ship at Rye pier on the Mornington Peninsula during the December-January summer holidays, and took holiday-makers onto the bay to view seals on the Port Phillip channel markers. By 1987 Wattle was a familiar sight steaming around the Melbourne waterside.

The 1988 Bi-Centennial celebrations raised Wattle's profile and activity, and on 30 December 1987, the tug led the International Tall Ships Fleet to their overnight berth off Rye and next day to Station Pier Melbourne. 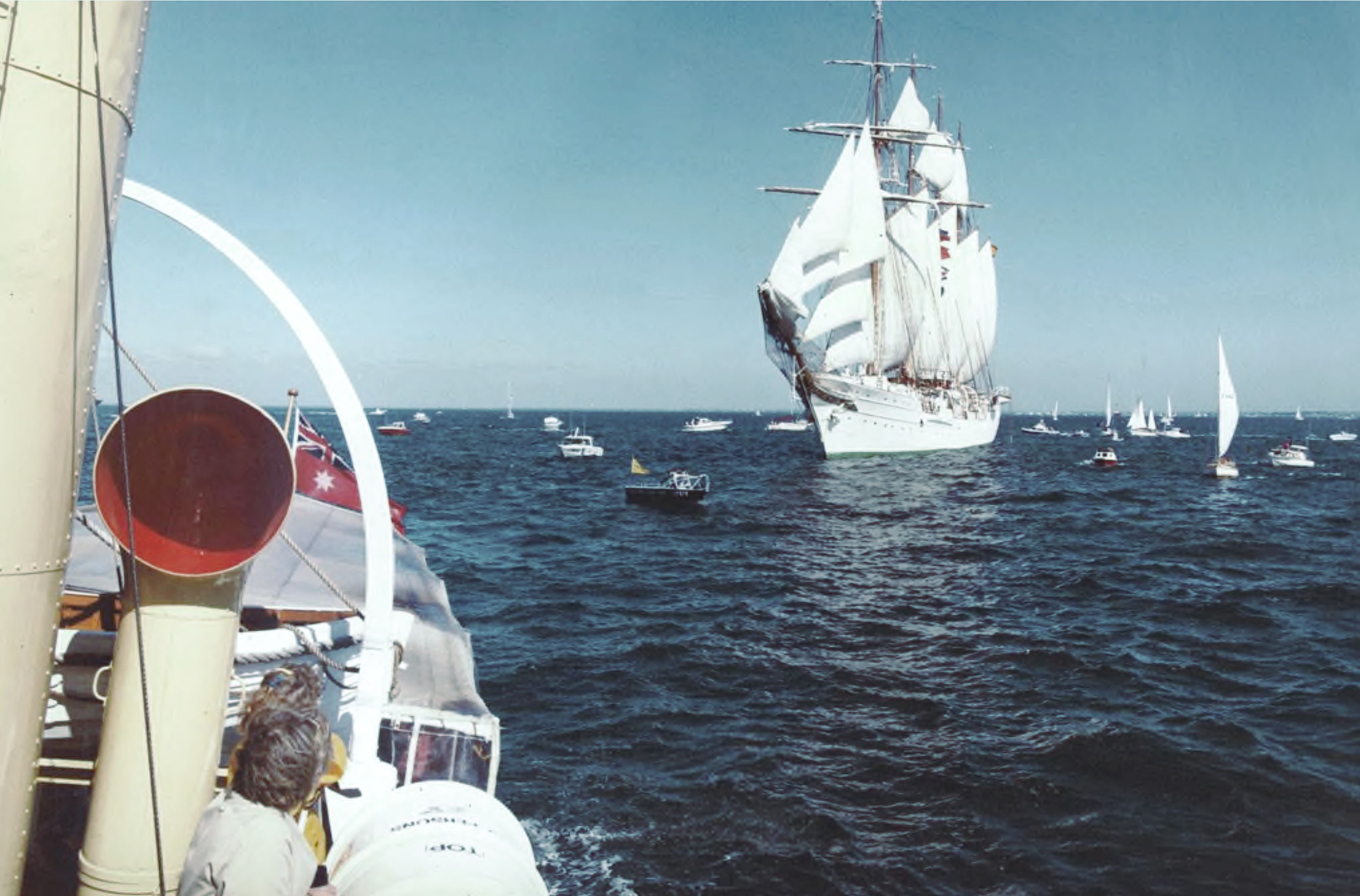 On 16 January 1988, Wattle steamed from Rye to Portsea to be the official start boat for the Petersville Regatta yacht race to Devonport. Unfortunately two of the Pit Special aerobatic planes putting on a show before the start of the race collided, with one crashing into the sea just ahead of Wattle. Captain Ralph McDonell, in charge of the Wattle, played a key part in communications and initial search actions at this incident.

In March 1988 Wattle was part of the welcoming fleet to Melbourne for the First Fleet Re-enactment sailing ships, and over subsequent years Wattle established a profile of pleasure cruises around Port Phillip. 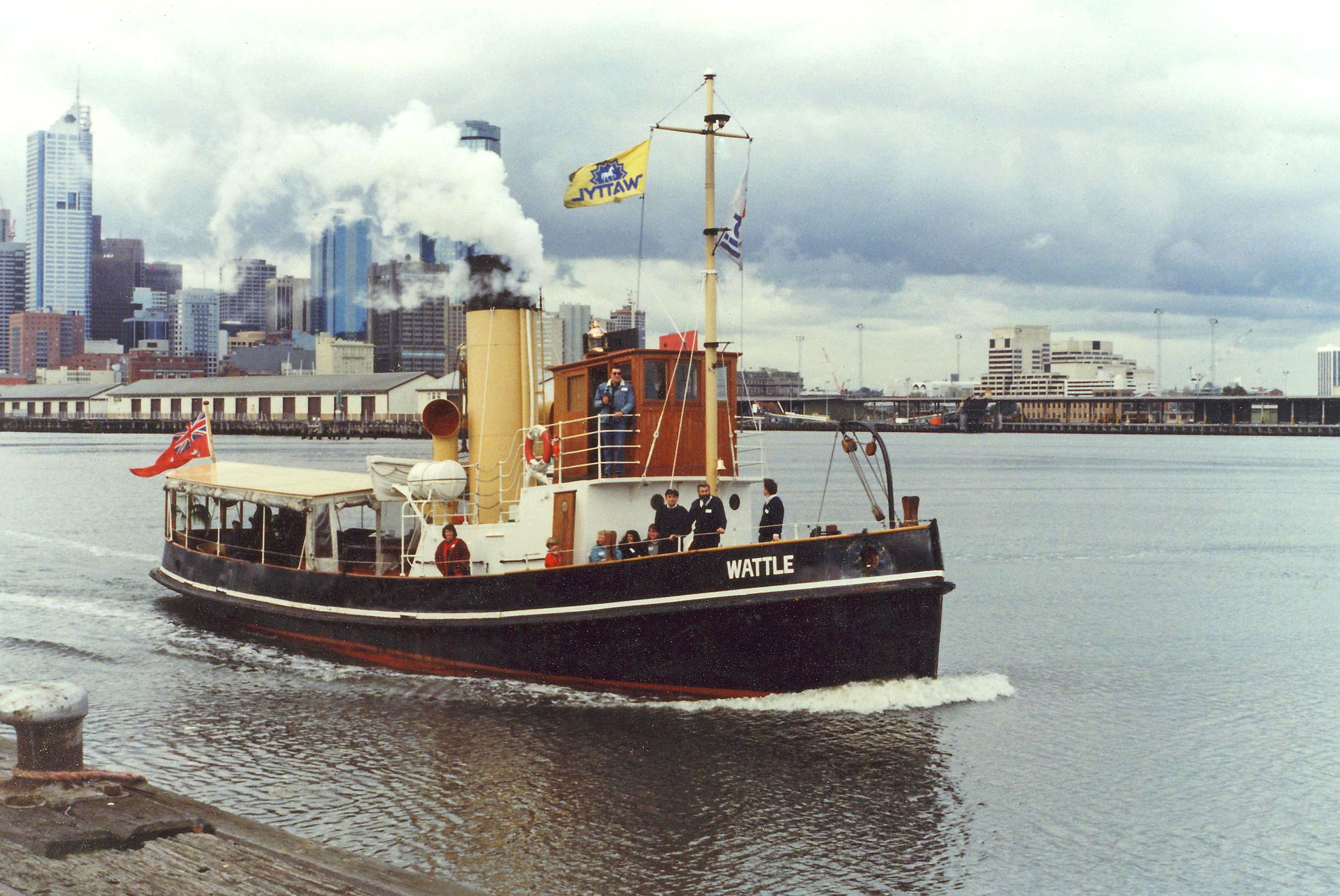 On 16 June 1993, the National Trust of Victoria awarded Wattle a citation which summarizes the significance of this small ship to Australian maritime history.

She was built at Cockatoo Island Dockyard during the Great Depression on speculation as an initiative to keep the yard's apprentices employed - the standard of workmanship considered to be unusually high. Of rivetted steel hull with experimental electrical welding used to build the bulkheads and fuel bunkers - the first time this new technology was used in an Australian shipyard.

However, growth and popularity created problems for Wattle and the VSA. One ongoing issue was raising volunteer crews to meet demand as charter work during the working week expanded. Frantic "ring arounds" the day before to locate qualified volunteer Masters, Marine Engineers, deck crew and greasers was a frequent occurrence.

Another problem was finding slipways to accommodate Wattle for major maintenance at a reasonable cost. Wattle was slipped five times in the period 1980 to 2009, at Williamstown (1987), Geelong (1990), twice at Appleton Dock Melbourne (2001 and 2002), and Hastings (2008) in Westernport Bay.

Other VSA activities were creating tensions within the membership. Much of this centred on the search for another steam vessel to restore and eventually run alongside Wattle. Some VSA members set up a separate company called Bay Steamers Ltd, which in 1987 acquired Lyttelton II, a 300 ton twin-screw triple expansion coal-burning tug. The protracted financial and physical effort required to restore Lyttelton II was too much for the volunteers of the VSA, resulting in internal differences, legal costs and a change in name and management.

From August 1997 the Victorian Steamship Association was extinguished, with Bay Steamers Maritime Museum Ltd (BSMM Ltd) replacing it and taking ownership of Wattle. Lyttelton II remained under the ownership and management of Bay Steamers Ltd, a separate entity but with a Board of Directors drawn from BSMM Ltd members. Later due to financial difficulties Bay Steamers Ltd disposed of Lyttelton II and dissolved the organization.

By 2002, problems were emerging with the condition of Wattle's hull, resulting in her dry docking at Appleton Dock slip on the Yarra. Survey restrictions also confined steamings to Hobsons Bay. During 2003 commercial services were suspended, and in January 2004 survey for Wattle was withdrawn, and it was laid up at various berths in the now renamed Victoria Harbour (formerly Victoria Docks) and Docklands precinct. 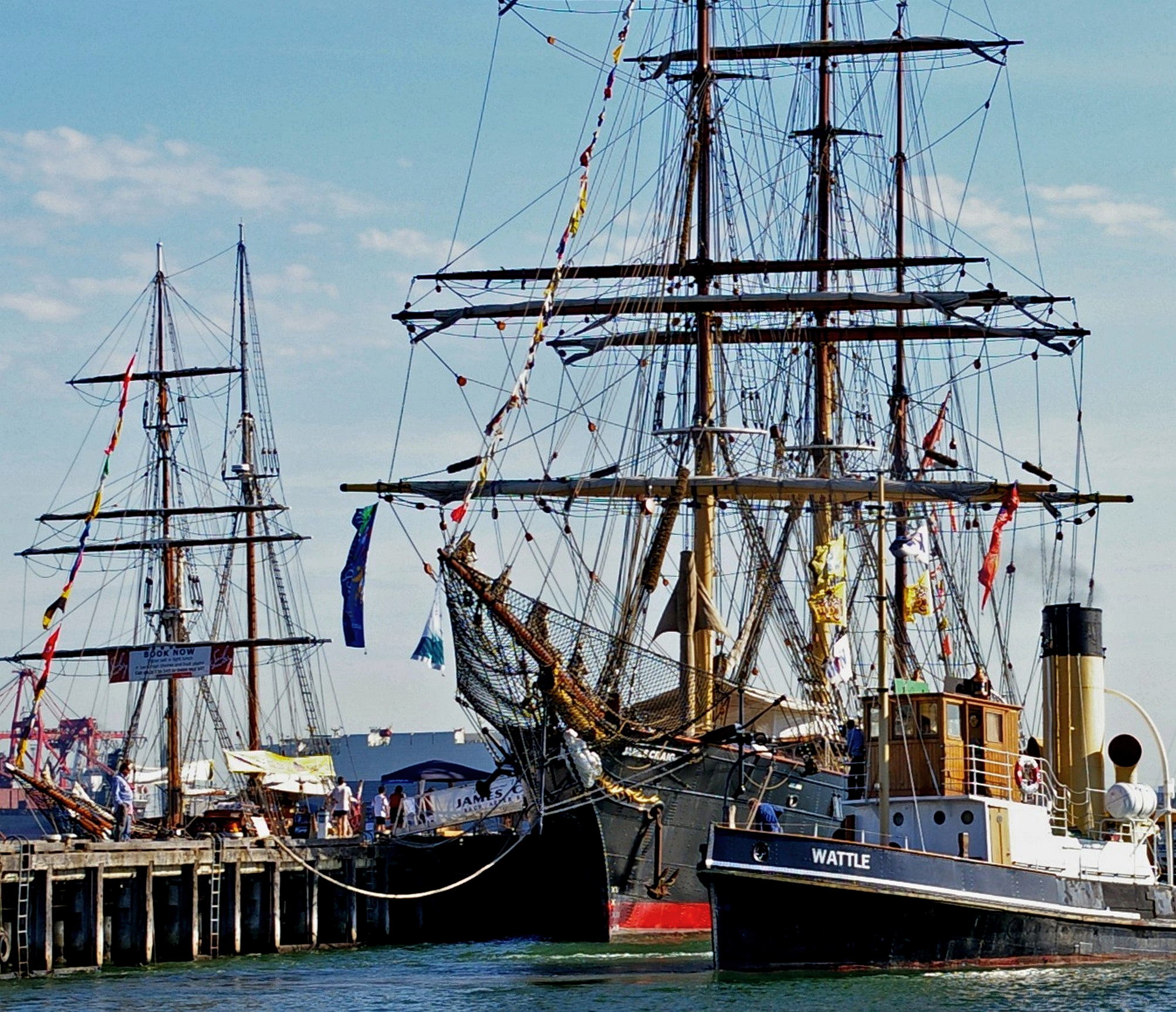 Whilst not allowed to operate as a commercial passenger vessel, Wattle could still do limited steaming in the confined waters of the Yarra and Hobsons Bay with prior approval from the marine authority. In March 2004 she steamed from Victoria Harbour to Williamstown and back to participate as a moored exhibit for the Heritage Boat Show, and on 25 January 2008, BSMM members steamed to Williamstown to inspect the visiting barque James Craig.

The deteriorating condition of the ship presented BSMM with a serious financial issue. Major hull restoration work was required, there was no income from paying passengers, and no sponsors or benefactors came forward despite extensive media appeals. The future for Wattle looked grim unless a source of funding could be found for the significant work.